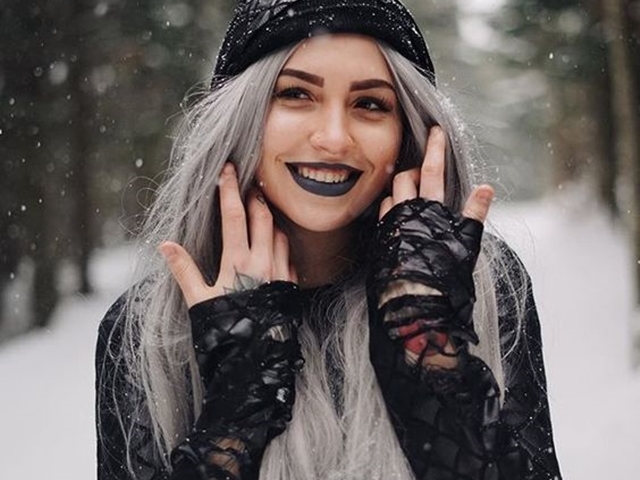 There used to be a time when wigs were very popular. Then came the time when people wouldn’t even look at it. And now wigs are really not a big deal. If you want you can use it and if you don’t then who’s forcing you! It’s just that using wigs is no more frowned upon and is pretty common these days. People in love with changing their hair colours every often, in fact, couldn’t be happier with the wigs. But do you know how it came into existence? Doesn’t it intrigue you to know how this act of wearing faux hair on your head started? Well, let’s feed your curiosity today and see all about the wigs and How Wigs Are Made | History, Materials, and Manufacturing. 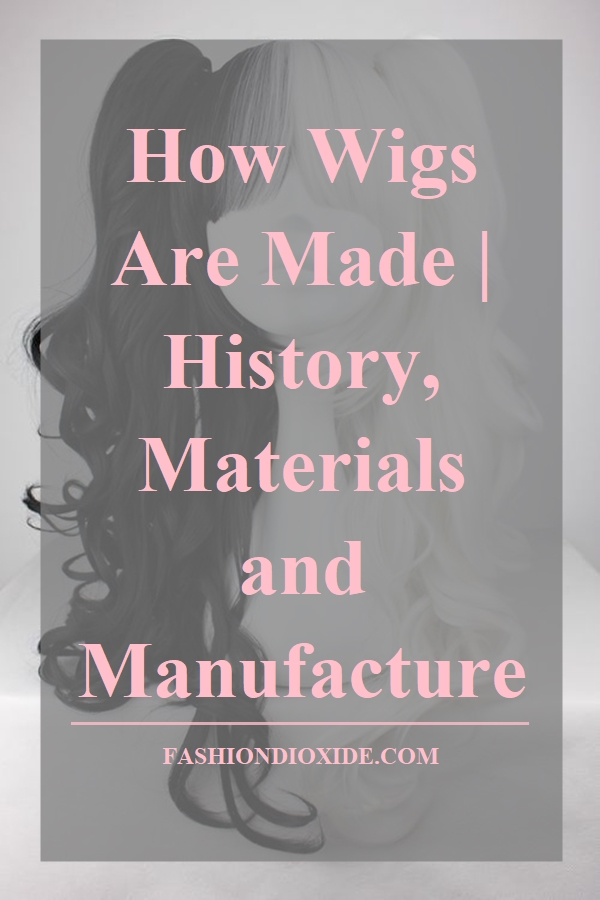 How Wigs Are Made | History, Materials, and Manufacturing

Why do you care? Just wear it and flaunt it! Umm, ignore your friend. It’s okay to want to know more about the wig that you wear every day. People use wigs for different reasons. Some wear it because they have lost all the hair due to illness and are thriving now – and believe it or not but wigs fuel their confidence – some use because of natural baldness (because let’s face it, wigs are cheaper than the hair transplantation) while there are some who wear it purely for cosmetic reasons. After all, it’s okay to colour the wig more often than damaging your natural hair with so many chemicals. Ooh, the horror! So using wigs is the most sensible option. But that doesn’t make colouring your hair a bad idea. Look here for some amazing silver hair colour ideas like this lady here flaunting. 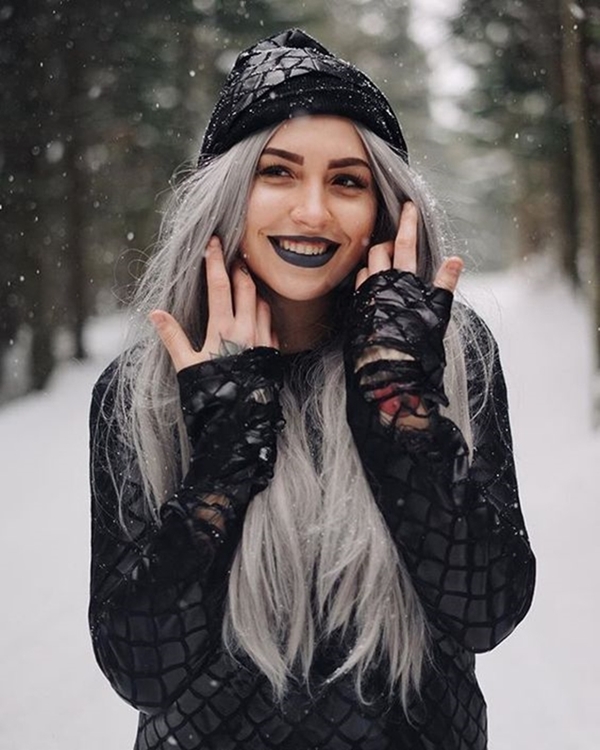 What we call wig is actually a periwig. Yeah, they used short words even then I guess! The wig is a short word for periwig and the anthropologists speculate that wigs are maybe 100,000 years old. Wow! That’s really ancient. Speaking of, wigs were most popular among the ancient Egyptians. We know Egypt and we know how hot the desert can be. So the ancient Egyptians used to cut their hair very short or mostly had clean-shaven heads. Now to protect their shaved heads, they created this thing called wig and wore them. It was their everyday fashion and there were other cultures who followed this trend as well such Greeks, Romans, Assyrians, and Phoenicians. Speaking of Greeks, have a look at these half-up and half-down hairstyles and look like a Greek goddess. 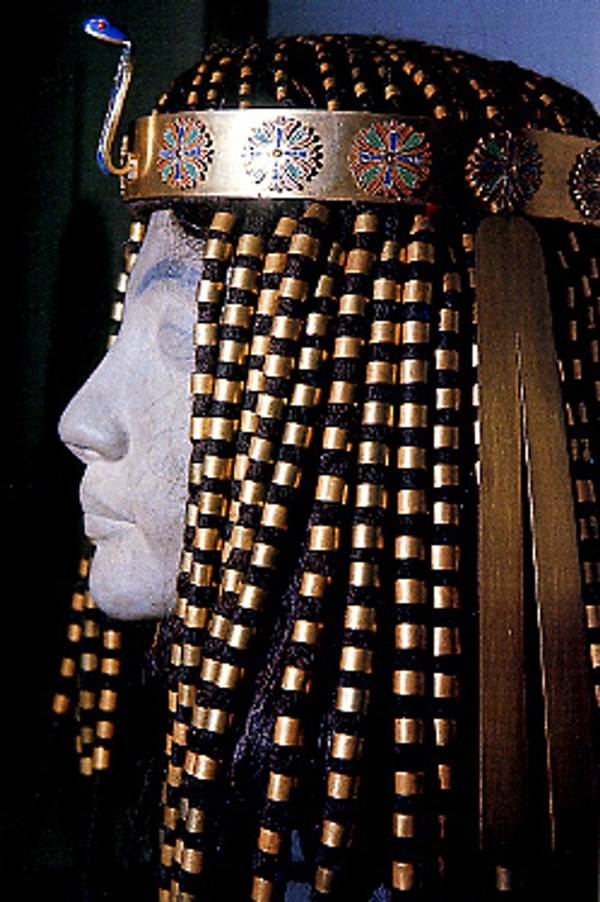 Then occurred the fall of the Western Roman Empire and so did the fall of the use of wigs for a thousand years. In the 16th century, the use of wigs was revived with a purpose to hide the baldness and to enhance the appearance. Louis XIII of France began wearing the wig in 1624 to compensate for his premature baldness. His son, Louis XIV continued to support this fashion that led to a hike in the in the popularity of the wigs in the European and European-influence countries. In fact, during the plague of 1665, there was such a short supply of wigs that they started making them from the hair of the deceased ones (Such a horror! But hush! It was a rumour, they say). 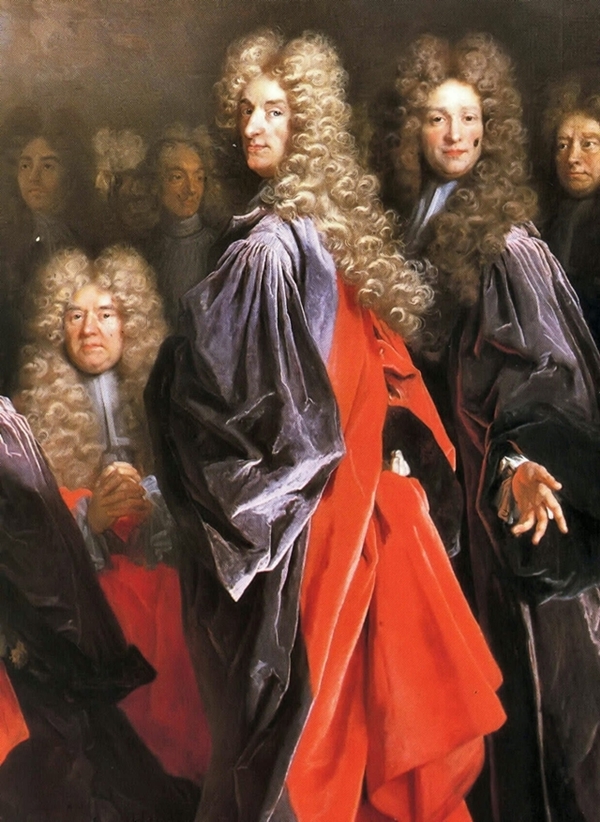 It would be an understatement to say that the wigmakers were in high demand in those days. The wigs those days were long, covering the back and shoulders which made them extremely heavy and not to mention uncomfortable. The wigs were expensive to produce (No wonder!) and were made from natural hair. To make the wigs cheaper, they started using wool, horse and goat hair and the horsehair turned out to be a great alternative since it effectively retained the curls for a longer period. Speaking of curls, you must always choose hairstyles as per the shape of your face. Here you can read in brief about it. 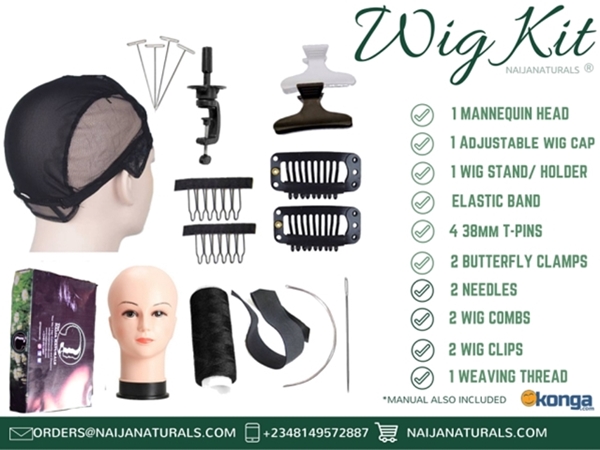 The synthetic hair wigs feel and look more like natural hair and are cheaper than the human hair wigs. Score! Synthetic hair wigs are also lighter in weight (Such a relief!) and hold any style perpetually. But there’s always a different side to the coin. Though the synthetic hair wigs are inexpensive and weigh less, they can be frizzy and stiff and wouldn’t move like the natural hair. Also, take them anywhere near heat and you will most likely end up damaging them because they are that temperature sensitive. You can’t deny that wigs are necessary accessories. Well, if you are planning a romantic date then these accessories will count as more than important! 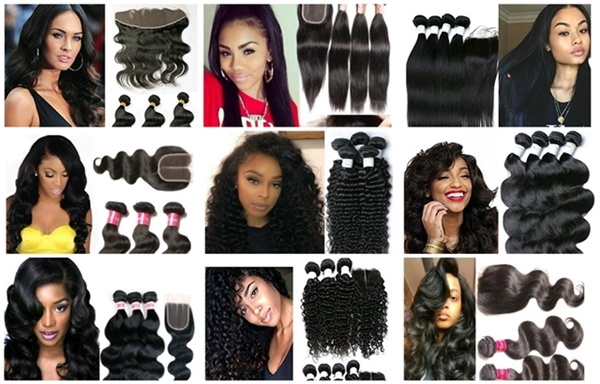 You can’t beat human hair wigs though. They come in all types, textures and patterns. So no matter how much you improve the synthetic hair wigs, the human hair is still the favourite choice of manufacturers of wigs. You can colour it, style it easily and unlike, synthetic hair wigs you can then restyle it again. The main sources for human hair are Spain, France, Germany, India, China, Japan, and South America with Italy being the prime source among them. Your hair is precious, no doubt in that. Then why don’t your protect from using these tips?  That might save you the trouble of buying a weak!

Though you can make the wigs at home, it can be pretty time-consuming. Wigs are made either by the hand or the machine. There are so many people who wear wigs, so it would suffice to say that making wigs with machines is the more sensible option. What’s more sensible? Buying the best products for your hair rather than damaging it with the low-quality stuff. 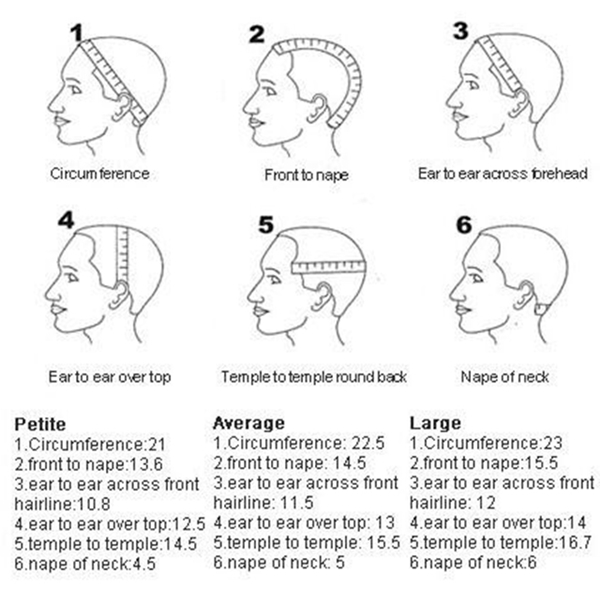 First, they prepare the hair. Now how do they do that? A million dollar question! They sort the hair into a neat pile with the individual hairs lying in the same direction. They also sort the hair by length and then they are bunched together. The hair is then pulled through a hackle, a bed of upraised nails or wire brush to remove any broken strands and tangles. Do you know how to apply gel? Believe it or not but many men do make mistakes in this thing and that leads to lumps in your hair. 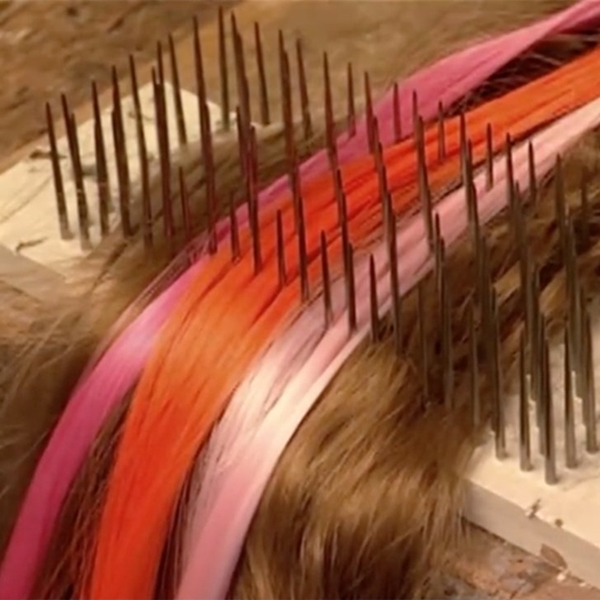 The hair is then carefully washed and cleaned so as to get rid of any nits. In case of nits found in the hair, the bundle is boiled in acetic acid solution and if not then the hair bundle is gently washed in a solution of hot water and disinfectant. After washing the hair thoroughly, it is rinsed in clear water and then dried either naturally or with the help of ovens. Then the hair bundles are placed between the drawing mats to keep them straight. 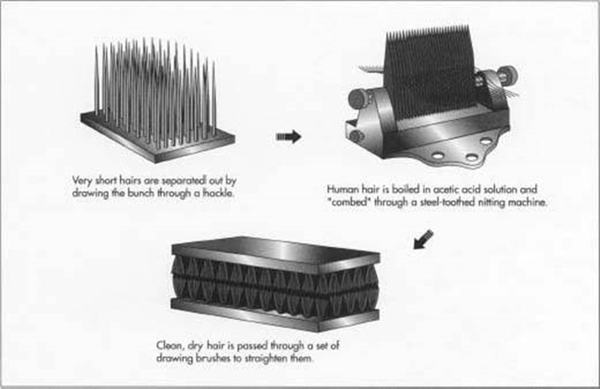 The wigs are made as per the shape of the client’s head. So there’s a lot of measurement taking process using which the form the wig base. The foundation of the wigs is laid over the silk netting which can be either lace, net or cotton that matches the colour of the wig. The hair is folded in the root and then is tied at each individual lace stitching. This process of attaching hair to the net foundation is called knotting. The process starts from the neck area and goes up from there. When all the hair is attached, a final row of knotting is done around the edge and to secure the knots, the inside surface of the wig is pressed with a heated iron. All this talk of knotting reminds of the knitting! I wonder why. Wink! Here are some amazing knitting stitches that you must see. 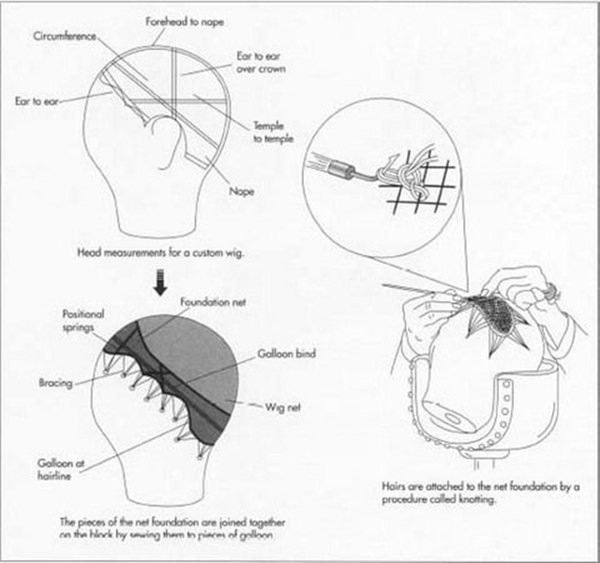 When this process is finished, it is time to style the wig. But even after taking so much care, the hair of the wig looks rough. So a quick wash and thorough dry later, the hair is ready to be styled. The hair is dampened and styled and it is then dried in the oven to set the style. 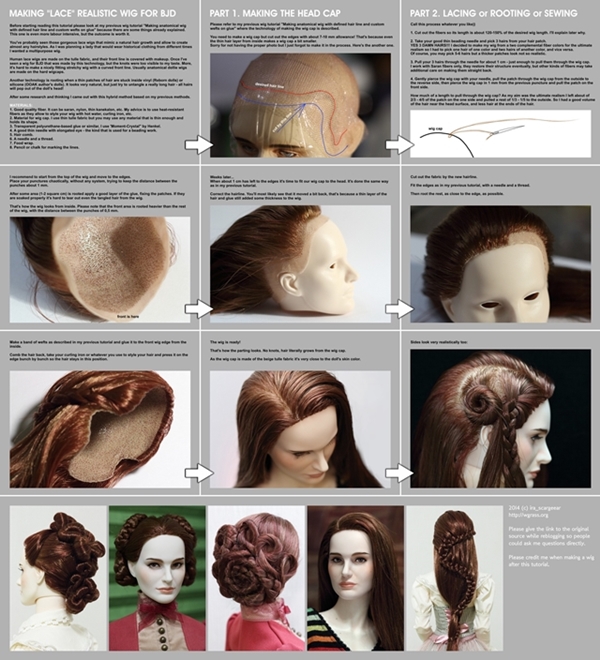 Whoa! Now you know why I said that making a wig can be pretty time to consume. You know what isn’t time-consuming? These quick and easy hairstyles. But hey, there are always those custom made wigs for you. And if money is the issue then you can try the synthetic ones. There are many options for blooming for you; you just need to pluck one. Just make a wig!